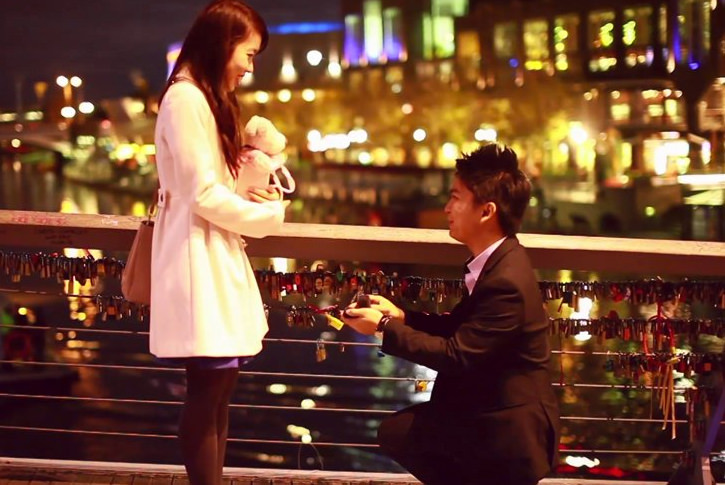 A few months ago I was asked to photograph a surprise proposal, needless to say, I was thrilled to be apart of such a moment.

Anthony had contacted me all the way from Singapore, he was planning a holiday to Melbourne with his girlfriend; and hopefully soon to be fiance Agnes. In our many secret emails back and forth. I discovered that he had never been to Melbourne before, and chose the location of the surprise proposal using the powers of google map view.  We made some adjustments to his original plan, and opted to film the proposal with a little pre message to Agnes and then a quick couple photoshoot around Melbourne before they went for their celebratory dinner on a Tram Restaurant. This man had it all down pat.

The plan was that he walk Anges to the middle of the Southbank footbridge, he would distract her while I snuck up behind them and left the (very throughtful) book he made for her, composed of memories they had made together over the last 5 years. In instances where there was no photos, Anthony had someone sketch the scene out. (take notes boys)! I would then run off and set up my angle while he showed her the book. The code for all systems go was when he handed her the bear, and I was on guard.

I have been assisting some wonderful wedding videographers at a few weddings earlier this year, and being able to implement some skills in my own work was a huge learning curve but also lots of fun. Many thanks to the lovely Callie Laine Clay for being my right hand man at the surprise proposal, she was on the faaar side of the bridge where Anthony and Agnes wave to first, and then I was lurching behind where they wave to second. What a fun shoot and an absolute pleasure to be apart of such a special moment.

Congratulations to Anthony and Agnes! xX

For more video work made by yours truly, click HERE.